- Update your OfferwallActivity declaration in AndroidManifest.xml according to the documentation

The ayeT-Studios Publisher SDK allows you to easily monetize your app and reward your users with in-app currency. Your users get access to our offerwalls, allowing them to earn currency for completing tasks such as trying new apps, answering surveys, signing up for free trials or watching video ads. The integration is simple, allows both managed (our servers store user information and balances) and unmanaged (you receive callbacks and handle user wallets yourself) currencies and also works well alongside traditional in-app purchases.

Before integrating the SDK in your app, you should sign up for a publisher account. Afterwards login as publisher and create a new Android App Placement using the correct package name you intend to use for your final app.
This is important since we'll generate an APP_KEY / Identifier for you which has to be added to your AndroidManifest (see step 3).

You can download the lastest version of our publisher library here:
ayetpublisher3.6.jar


3. Add the library to your Android Studio project

Copy the downloaded jar library to your Android Studio project (in the app/libs/ folder).
Go to "Module Settings" (F12 or right-click your app in the Project View) and check the dependencies tab to make sure the library is added as a file dependency and set to "Compile": 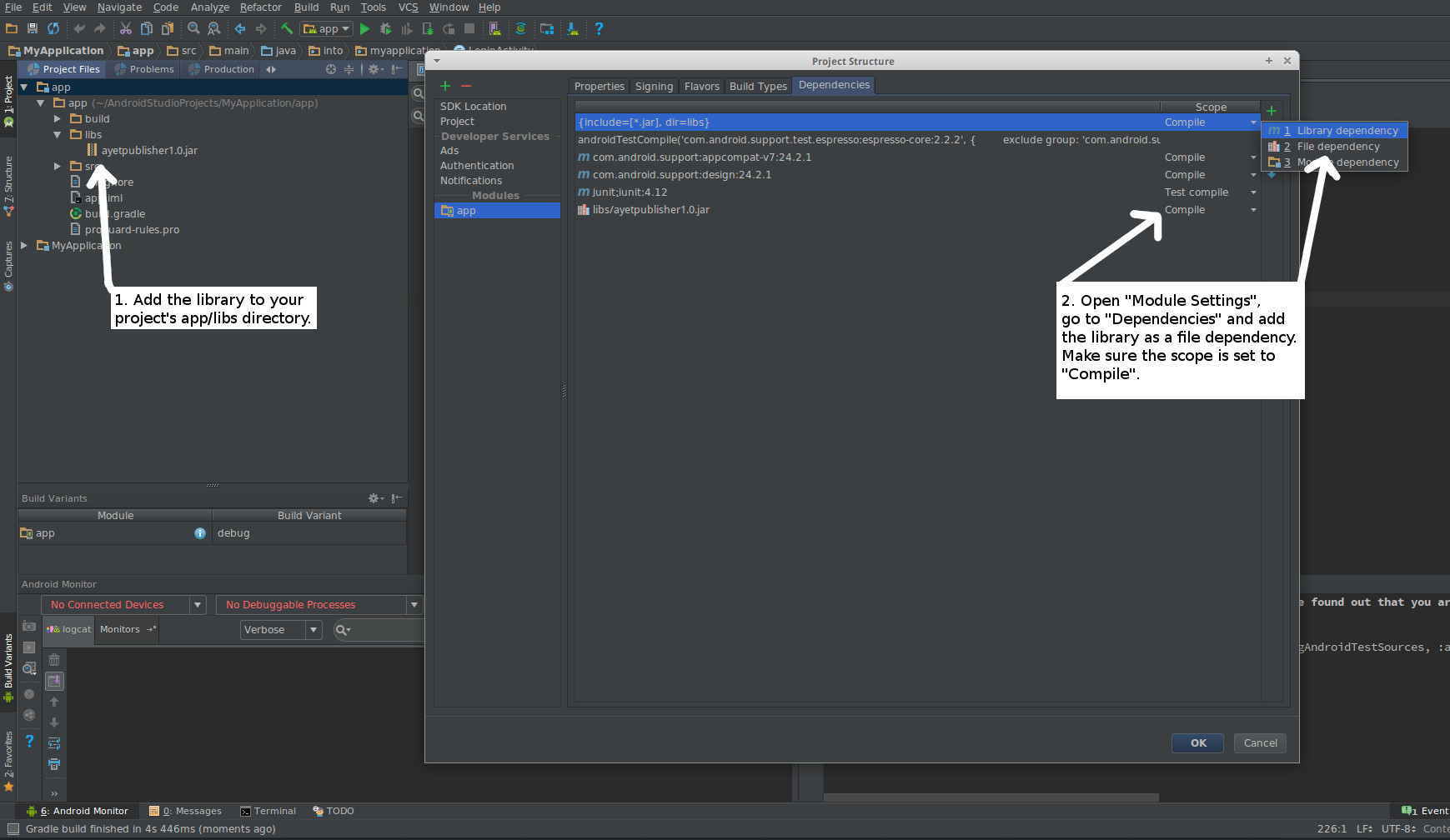 Afterwards open your AndroidManifest.xml and add our offerwall activity to your application scope:

Another AndroidManifest.xml requirement is your AYET_APP_KEY which you can fetch from our publisher dashboard in your placement or adslot details - add it to the application scope as well:

Also make sure to check your permissions in the AndroidManifest.xml:

This is an example for a complete AndroidManifest.xml:

In this step, we are going to initialize the SDK in the main activity. We also use callbacks to track the user's account balance - this is optional and not required if you're planning to manage user balances on your own servers.
Attention: The username or external identifier passed in the init call (e.g. username, hashed email address, etc.) will be accessible in the conversion callbacks through the {external_identifier} parameter.

If you want to make sure the SDK has been initialized and is ready to display the offerwall or video ads, you can use the following function:

If you want to spend user currency, for example if the user clicks a "purchaseInAppItem" button, you can utilize the deductUserBalance function:

Showing the offerwall for an offerwall adslot is straight-forward, you can simply call showOfferwall from any Activity:

showOfferwall starts the offerwall activity for the adslot you pass as second parameter and displays available tasks for the user to complete.

If you want to display the offers manually in a custom form (e.g. "native offers"), you can call getNativeOffers for a Native Offer Feed adslot you created in your placement:

getNativeOffers fetches all offers fitting this user / device in the background and calls NativeOffersCallback on completion. This usually takes between 0.5s and 4s depending on your adslot configuration and traffic sources.


After retrieving a list of native offers, you can store them and later activate one of the offers like this:

activateOffer takes an offer id found in the native offer feed, checks the requirements and tries to reserve it for the user.


Class members for each AyetOffer entry are:

Video ads are a great way to monetize your apps & games. Compared to banner or static interstitial ads, they deliver an outstanding eCPM and are widely accepted by users - if implemented correctly.
While video ads are non incentivized offers which either pay the publisher per view (CPM) or per installation / action (CPI / CPA), we give publishers the opportunity to reward their users for watching an optional (skippable) "rewarded" video ad.
Regardless of the video ad type, it's strictly forbidden to prompt users to install apps or interact with the promoted assets.

Normal video ads work like TV commercials. They are between 15s and 30s long and cannot be interrupted. A typical use case is a commercial break in games between levels.
Rewarded video ads are optional and user initiated. Users can skip rewarded ads at any point, but will be rewarded with in-app items or virtual currency if they watch it completely.

Normal videos are not limited in terms of frequency and capping, but for rewarded video ads it's strongly advised to check and configure the placement correctly (Settings > Rewarded Video Ads > Rewarded Video Capping & Frequency) to prevent abuse.

Both video ads and rewarded video ads send publisher earning callbacks without user or device information (so only offer information and payout_usd is set) if your callback URL is configured in the placement overview.
Please note that for CPM offers, it's possible that multiple views for a campaign are grouped into one earning and callback to avoid congestion.

Rewarded video ads can additionally (and independently from publisher earning callbacks) send user currency callbacks, if Settings > Rewarded Video Ads > Enable S2S View Callbacks is enabled. Given that the placement callback url is set and the currency amount per rewarded video view is greater than 0, this will send a S2S callback for each completed rewarded video view (currency_amount is set, but payout_usd is always 0).
Before starting to implement video ads, please make sure that this ad format has been enabled for your placement.
If not, go to Placement > Settings > Video Ads and request access or contact your account manager to have them enabled.


To show a non-interruptable, fullscreen video ad (15-30 seconds depending on your placement video settings), you can make the following showVideoAd call:

If you want to restrict video ads to wifi connectivity only, you can append the AyetSdk.FLAG_WIFI_ONLY flag:


Another capability of the SDK is to asychronously request a video ad. This gives you the opportunity to decide whether the video should actually play or if it should be discarded.
Hint: The average request-to-play time is around 1.5-3 seconds for video ads under good network conditions.
To request a video ad asynchonously, you can use the following code (note the different callback interface):

If you want to manually manage your users currencies on your own servers, you can configure a conversion callback url in our publisher dashboard.
To do so, navigate to Placements / Apps, edit your app placement and set the Callback Url to your server's postback url:

If this is the callback url your set for your app placement:
A typical conversion callback sent by our server will look like this: * Note: This assumes you set the user identifier to username in your AyetSdk.init(..) call, the currency conversion rate in your placement was 1000 per $1 and the user completed an offer with a $0.36 payout.

Important: Your server must always reply with an HTTP 200 status code to our postbacks. Otherwise we will resend the postback 12 times over a span of one hour before giving up.

Postback Verification with HMAC Security Hash (optional):
Our server will always add a custom header, X-Ayetstudios-Security-Hash, containing a SHA256 HMAC hash of the request parameters and your publisher api key.
Your API key can be found in your dashboard at ayetstudios.com under settings.


If your want to restrict postbacks to our callback server IPs, please whitelist the following IPs and check back regularly for possible changes:
Last IP List Update: 2017-04-07

If you're going to use Proguard in your release build to obfuscate your application, make sure to add the following rules to your proguard-rules.pro files:

Important: It's always highly recommended to test your release builds before publishing them on Google Play to verify that they behave as intended!